Grumbling come easier to me than I care to admit.

In fact, my week would have been filled with grumbling if the Lord wouldn’t have spoken to me from His Word on Sunday morning.  As my husband was preaching Exodus 15, I started to fixate on the word “grumble”.

I’ve heard the story since I was a child and read the word grumble a million times it seems. Yet, on Sunday morning, I just knew there was something more I needed to learn about grumbling.  So I started studying the Israelites during the Exodus and where exactly the word “grumble” was seen.

This is three days after witnessing God part the Red Sea. This huge miracle happened before their eyes, but not having water readily available became the focus of their attention. Not being able to find water led to bitterness in their hearts and so they “grumbled against Moses”.

This is two months after they had witnessed the parting of the Red Sea and the provision of water. They at seen with their eyes the power of God but when their stomachs got hungry, they forgot how to rely on the power of God. Instead of trust in God, “the whole congregation of the people of Israel grumbled against Moses and Aaron in the wilderness”.

As I studied this story, there were three warnings I noticed about grumbling.

The grumbling reflected their heart.

Witnessing the passing over of the angel of death, being led by a pillar of fire and smoke, the parting of the Red Sea, and protection from their enemies didn’t change their heart. They saw the power of God, but they had yet to trust the power of God. The miracles were pretty cool to witness, but those big miracles didn’t result in a hardcore faith for the people.

They were following God, but yet their heart still doubted if God was good and would provide for them.  Like a scar shows a past injury, the grumbling showed the deep down disbelief that God would not follow through on His promises.

I’m sure not everyone woke up on the same day and started grumbling about the same thing.  Maybe it started with just one person muttering under her breath, “man, I miss the olden days where I didn’t have to worry about where my food would come from”.

The people in the next tent may have overheard and agreed with her and started a late at night sitting on the front porch conversation about what food they were missing and how their stomach craved such food.  Before you know it, they were out gathering some water, and someone mentioned how good some meat would taste with this water. Suddenly, you have “the whole congregation of the people of Israel grumbled against Moses”  saying “would that we had died by the hand of the Lord in the land of Egypt when we sat by the meat pots and ate bread to the full.”

What often starts out as a small grumble we mask as simply an observation, can spread like wildfire into a full blown revolt against the truth of who God is. Grumbling is contagious, whether we want it to be or not.

Grumbling almost always causes you to believe a lie.

The Israelites, as they were fleeing Egypt, didn’t long to stay in Egypt.  They willingly fled and rejoiced that Egypt was no longer their home.  In fact, in Ex. 15, after they cross the Red Sea, we see them sing a song to the Lord declaring, “The Lord is my strength and my song…I will exalt him…Your right hand, O Lord, glorious in power, your right hand, O Lord, shatters the enemy”.  Obviously they didn’t view the Egyptians as friends or even as nice people.  They were enemies and oppressors.

However, once faced with hardship, their memory began to get fuzzy, and to quote Sara Groves, “they were painting pictures of Egypt, leaving out what it lacked.  The future looked so hard and they want to go back.”

They didn’t have an abundance of anything in Egypt, but its funny what that little grumble does to your memory.  Suddenly, the grumbling makes them truly believe life would be better back in slavery, under oppression, and enduring suffering.

Maybe that’s why Philippians 2:14-15 tells us “to do all things without grumbling or questioning that you may be blameless and innocent…among whom you shine as lights in the world…”

Paul knew what most of us want to forget when we are stressed.

believe a lie; the lie that says God isn’t going to come through.

forget who God is and where He is taking you.

focus on the hardship and not the land flowing with milk and honey that is in front of you.

Give up your joy, your trust, and your hope.

This makes Philippians 2:14-15 more than just a good suggestion for us as believers.  It becomes a clear warning to the destruction grumbling has in your life.

Stop grumbling isn’t merely a good suggestion. It is vital for the life God wants to give you. So let’s stop the grumbling, believe the truth, and chase after God today. 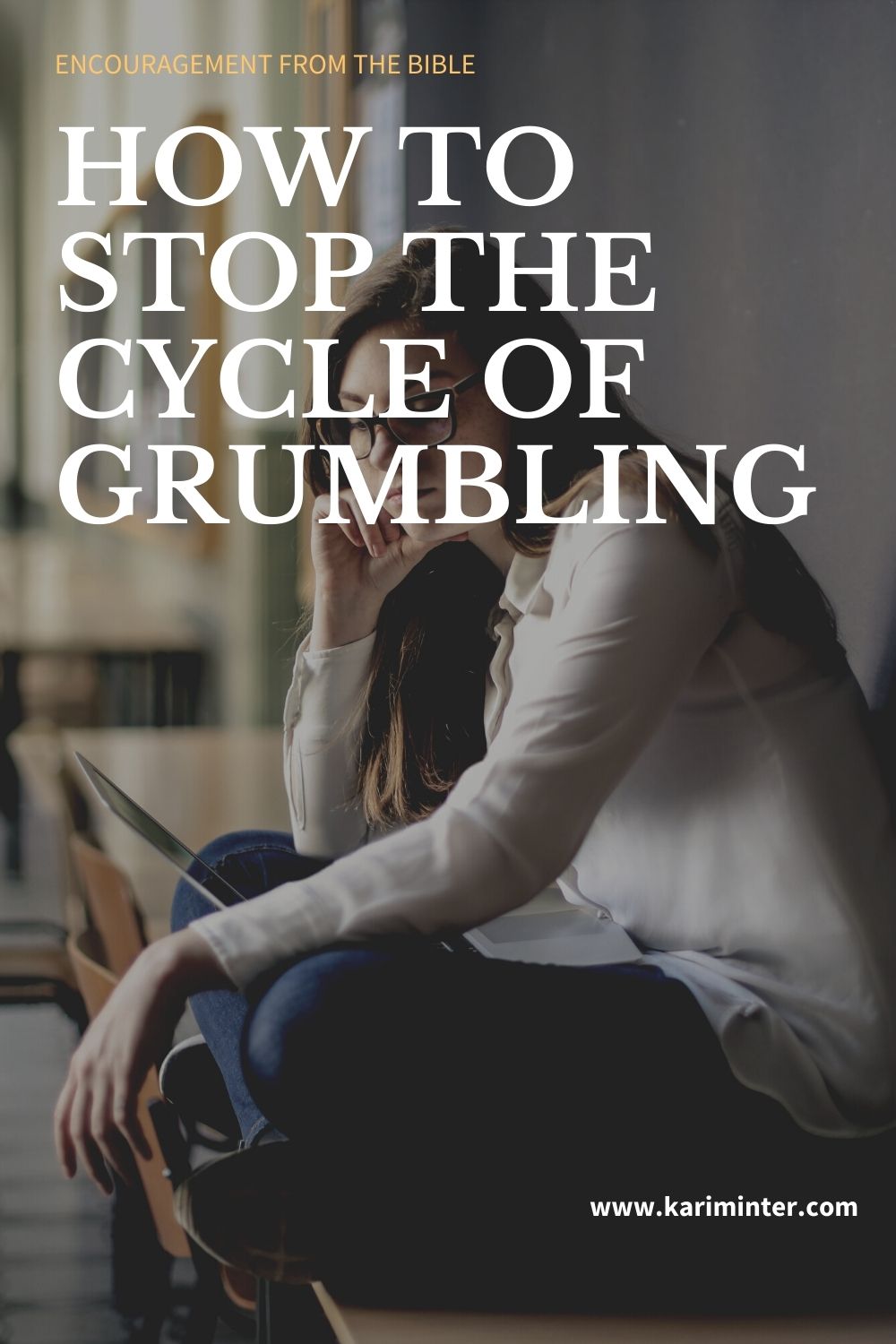